Earlier this week, we relayed a claim from Turkey that Galatasaray were considering making a move for former Everton manager Ronald Koeman, as the Dutchman is currently without a club.

It wasn’t the worst idea in the world, what with his experience and the Turkish club’s desire to climb back into the top spot in the Süper Lig.

The problem is, he isn’t interested in the slightest in returning to club management, making that very clear to De Telegraaf on Friday.

He said: “I have always said that being the Dutch national team is an ambition of mine. I know my name is mentioned regularly, but I haven’t been contacted yet and there have not been any calls”. 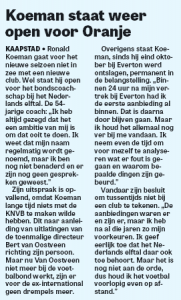 In fact, Ronald Koeman revealed to the Dutch newspaper he got one about 24 hours after he was sacked from Goodison Park, which was then followed by others.

He continued: “The offers were and are there, but after all these years, I have my preferences. I honestly admit the Dutch national team is one of them, but it’s not yet on the agenda, so for the time being, I will keep football at a distance”.

Considering the Netherlands won’t be taking part in the 2018 World Cup, there’s no rush for them to find a new manager anytime soon.

It seems they might even wait for Ronald Koeman to be fully ready to return to management.