For Gerard Deulofeu, one of the brightest talents to emerge from La Masia since a certain Lionel Messi, the route to playing for his childhood team regularly was an unconventional one.

Loaned to Everton, who eventually bought him, the Spanish winger struggled under Ronald Koeman at Goodison Park, and a loan move to AC Milan was sorted out last January, where he found some form again, forcing Barcelona to use their buy-back clause at the end of the 2016-17 season.

Speaking to Gazzetta dello Sport Extra this week, the 23-year-old went back over the past year or so, and was quite candid about his experience at Everton.

He said: “At Milan, I played a lot and I was happy on the pitch. Those five months were marvellous. For some time I hadn’t enjoyed myself playing football, and at Milan, I started to feel good on and off the pitch again. 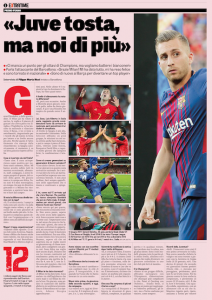 “Milan gave me everything. I went there from England, where I was suffering, and with Milan, I saw the light again.”

On top of all this, his form in Italy (four goals and three assists in 18 appearances) whilst on loan from Everton earned him a recall to the Spain squad, where he scored one goal and assisted another in a 2-0 friendly win over France.

However, his early struggles at Barcelona, where he’s found himself on the bench more often than not of late, mean that he wasn’t called up to the last two squads picked by Julian Lopetegui.

Ousmane Dembélé’s injury, which has ruled him out for a large chunk of the season, was the perfect opportunity for Deulofeu to step in and make himself a spot in Barcelona’s first-team.

As of yet, however, that hasn’t happened.