After being dismissed by Everton, Ronald Koeman could find a new job in Turkey with Galatasaray, reports Fanatik.

The Turkish newspaper claim that the Galatasaray president Dursun Ozbek has identified the former Everton boss as a man to replace Igor Tudor.

Galatasaray sacked Tudor following their disappointing loss against Yeni Malatyaspor last weekend and the club are already in discussions with various managers to replace the Croatian. 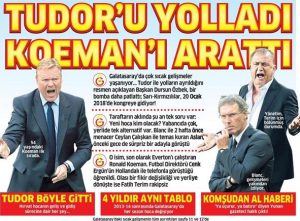 Fanatik say Koeman is the club’s first choice and that he’s highly regarded by the Galatasaray board.

According to Fanatik, Galatasaray CEO Cenk Ergun spoke with the Dutch manager this week, and if everything goes well Koeman will become the new head coach at Galatasaray.

Koeman was dismissed by Everton earlier this season, following a disastrous start in the Premier League.

Despite being sacked by Everton, the 54-year-old could still find himself in a title challenge with Galatasaray currently sitting 3rd in the Turkish League, one point behind leaders Medipol Basaksehir.