Chelsea are expected to bring in a new goalkeeper this summer after Kepa Arrizabalaga’s displays didn’t convince Frank Lampard.

This has been frequently discussed in the British media and the Blues have already been linked with a handful of keepers.

Kepa became the world’s most expensive goalkeeper after the west London club paid €80m to Athletic Club Bilbao in 2018.

Former Bilbao keeper Imanol Etxeberria coached the 27-year-old at the Basque club and says his compatriot is not experiencing a strange situation at Stamford Bridge.

“It usually happens, these things with star signings… Many times, they depend on the results of the team and not the personal side,” Etxeberria told Mundo Deportivo.

“It’s a bit of the team’s inertia, if you get good results, everything goes more unnoticed. And, if it is the other way around, they start looking at you with a magnifying glass, they question everything, the weird questions start. What happens to this man, what is not happening to him…?”

Lampard dropped the Spain international in crucial fixtures at the end of the season, which included the final league tie against Wolverhampton Wanderers and the FA Cup final defeat to Arsenal.

Willy Caballero was preferred ahead of Kepa, but Etxeberria is of the belief the 38-year-old is not a better keeper.

“Kepa has amply demonstrated at Athletic, in the Spanish team and in his first year at Chelsea that he is a guaranteed goalkeeper, of a high level,” he added.

“But I don’t know, you have to be there within the team and know the information that the coach uses to make those decisions. From the outside, we can only express our opinion by what we see.

“From what I know Kepa, he is a very high-level goalkeeper. Whoever plays ahead of Kepa has to be doing very-very-very well.” 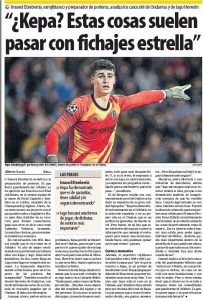 “And I don’t think it was the case at Chelsea, that Caballero was far above Kepa’s level. What happens is that sometimes the coach decides, they are tastes, moments, but Kepa has quality and will continue to show it for sure.”

Although Etxeberria has backed his compatriot to showcase his qualities, Mundo state Lampard ‘wants to get rid of him anyway’ this summer.