Dropping down to third in the Championship, Leeds United’s form has dipped a little bit of late, picking up just two wins from their last eight games.

Whether this is down to Marcelo Bielsa’s rigorous demands as a manager or just a temporary blip (a few of those dropped points came to bottom half opponents), we’ll have to wait and see, but one thing is certain: the Argentinian will leave a lasting impact on the players at Elland Road.

Speak to any footballer who has been tutored by the former Lille manager, and they’ll tell you how great he’s been for them.

Take Diego Milito, for example. A Serie A and Champions League winner at Inter.

Speaking to Corriere dello Sport, the retired Argentinian striker was asked who the most important manager in his career had been.

He said: “A difficult question. I’ve always said that every one has taught me something. Mourinho is surely one of the best, but if I had to choose just one, then Bielsa, who gave 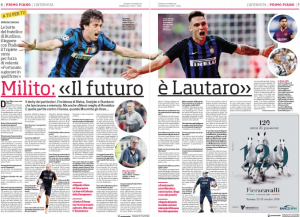 me a lot. He was the manager who gave me the possibility of playing for the national team and made me learn so much, technically and tactically.”

If this is what someone who was once considered one of the better forwards in Europe has to say about the Leeds manager, just think what he could bring to the group of players at Thorp Arch on a daily basis.