Following Real Madrid’s 2-1 loss to Levante, the pressure on Julen Lopetegui has increased considerably at Real Madrid, and the former Spain manager is now in serious danger of getting sacked.

While Castilla manager Santiago Solari appears to be the favourite to act as interim (and then potentially be Zidane numéro deux), there have also been some bigger names on the list of replacements, including Chelsea’s ex, Antonio Conte, on whom Florentino Pérez is said to be ‘insisting on obstinately’.

The Italian is still technically being paid by the Blues, much like Maurizio Sarri was at Napoli, and before anything happens between the Italian and Real Madrid, that needs to be sorted.

That’s why Corriere dello Sport are reporting that Conte’s lawyers have, ‘over the past few hours’, handed out an olive branch to Chelsea, ‘showing a willingness to finally find an agreement that would suit everybody’. 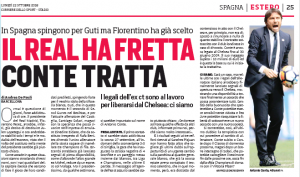 Doing so would allow him to sign with a new team far quicker than if Real Madrid (hypothetically) had to discuss payments with the Blues.

As things stand, Conte is still receiving his paycheques from Chelsea, owed €10m this year, with a contract running until 2019.