These could all be bad film names, but they are all headlines from the Portuguese press today, as all the newspapers have a creative story to describe Porto’s biggest home defeat ever.

With Liverpool’s performance giving The Dragons no chance to qualify for the quarter finals, all the Portuguese outlets could do was to praise the Reds and find the reasons why Porto did so badly in such an important game.

O Jogo, Porto’s local newspaper, tried to use a bit of music to make things lighter. They say even though Liverpool’s anthem says they will never walk alone, they did walk alone last night, out alone to qualify for the quarter finals. The Beatles also get a mention, since ‘Help’ should have been played when Porto were trailing 2-0. 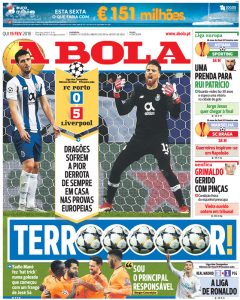 Record used cinema, mentioning ‘Five Darker Shadows’, and saying that ‘Liverpool from another galaxy’ couldn’t give Porto a chance.

The truth is that apart from the headlines, all the newspapers blame the Porto goalkeeper José Sá for some mistakes, but acknowledge Liverpool’s quality, and give the Dragons a bit of relief due to the Reds’ superiority.

Porto fans are much praised for supporting the team even after the match, and as Jornal de Notícias says, even their best players ‘don’t have enough quality to play against a team of the Reds’ calibre’.