After a poor start to the season, Lemina has established himself as a key player in Fatih Terim’s side and was instrumental in the club’s recent good form before the Turkish Super Lig stopped due to the Coronavirus outbreak.

Galatasaray manager Fatih Terim is keen to have Lemina in his team for next season and has urged the club’s board to make a move for the Southampton owned player.

It seems the Gabonese international isn’t part of Saints’ manager Ralph Hasenhüttl’s plans, and Galatasaray are hoping they can keep him for at least another season. 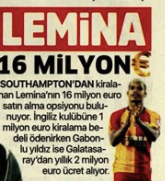 However, during talks it’s stated that Southampton told Gala to pay his redemption clause, which is set at €16m, but this seems impossible because of their financial situation.

Lemina’s contract at St Mary’s will expire at the end of June 2022.