Despite yesterday’s reports of Arsenal’s pursuit for the Boca Juniors forward Cristian Pavon, the feeling in Argentina is that the player is not moving so soon.

Outlet TyC claimed the Gunners could be making an offer for the 21-year ‘in the next few hours’, but Boca Juniors and the player’s agents are not so confident about it.

Newspaper Olé brings a few quotes about the situation today, with basically everyone denying that the player will be off in January.

Starting with Boca Juniors president Daniel Angelici, he said: “No offer has arrived for Pavón, I see him looking forward to stay at Boca to play the Libertadores, we’re going to have him for the entire of 2018.

“No formal or informal proposal arrived. I made a new contract to make him comfortable.” 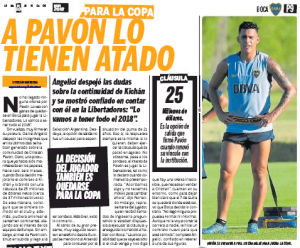 Pavon’s agent Fernando Hidalgo also confirmed that there are no offers so far, from Arsenal or anyone else, despite Olé mentioning that he’s been getting ‘calls from England’.

“We agreed something and we have no reason to change now,” said the representative about the release clause signed in June.

“The only possibility that he leaves is only if the club comes and tells us that there is an irresistible offer, that they need to sell Cristian.”

Olé only says that Arsenal ‘have been mentioned’ by other outlets, so they don’t seem to have any of their own information about the Gunners interest.

Regarding the player’s clause, as you can see in the image, they say it’s of US$25m. But that’s the price after tax, making the full release clause US$37m.