A week ago, reports from Colombia claimed that Tottenham Hotspur were chasing Porto striker Luis Diaz.

It was said that José Mourinho made a personal request for the player’s arrival, and Spurs would make a first offer of around €12m for his transfer.

We covered the news and pointed out that it’d be unlikely for the Porto star to move for that amount. Now it’s time for the Portuguese media to bring their take on the situation.

Newspaper O Jogo brings a story today claiming that Porto have made it clear they won’t negotiate Diaz’s transfer this summer. That means he’s only leaving for the amount of his release clause, which is €80m. 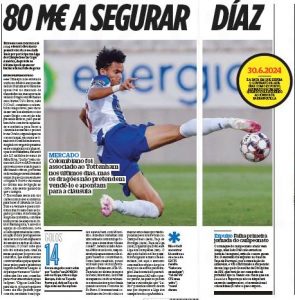 Diaz signed for Porto in a €7m deal from Junior Barranquilla last summer, and had a great first season in Portugal, with 14 goals and seven assists.

But the Dragons believe he could do even better next season, and his price would go up if he does well in the Champions League and in Copa America.

O Jogo writes that there’ve been no offers from Tottenham so far.