With Aston Villa’s great recent form giving them good chances of being promoted to the Premier League, perhaps it’s time for them to get linked to bigger targets.

The Villains are mentioned this week in a story from newspaper Correio da Manhã about the future of Porto striker Moussa Marega.

The Portuguese newspaper says that with the player’s recent performances, especially those against Liverpool in the Champions League, he’s been catching the attention of English sides.

That’s when Aston Villa get a mention, since they already tried to sign Marega last summer, but were stopped by the striker’s €40m release clause. 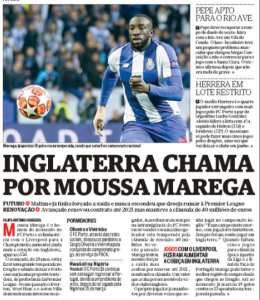 Correio da Manhã doesn’t seem to know if Villa would go back for the player this summer, but what they make sure to say is that Marega is pretty keen on moving to the Premier League, as he’s been having this desire for a while now.

With €40m not sounding like a lot nowadays, especially for a club who need reinforcements for a season in a top tier, Villa could certainly go after Marega in case of a promotion to lead their frontline.

The striker has 19 goals and 11 assists this campaign, and has been shining at Porto for a couple of seasons now.

Although he would be moving from a Champions League side to a club who have just been promoted, the Premier League has proven to be quite an attractive place for players from Portugal, even if his intention is to move to a bigger side in the future.