Nacer Chadli landed on his feet this summer when he secured a late transfer to AS Monaco.

Not only does he get to live by the sea, in a warm climate, tax free, but he’s also gone to an ambitious club who were French champions not so long ago and who are expected to qualify for the Champions League on a yearly basis.

It would have been hard to imagine all of that during Chadli’s darkest days at West Brom. Edged aside during the club’s relegation season, the footballer has a lot to be thankful to Roberto Martinez for.

Despite the West Brom issues, Martinez kept the faith and Chadli was subsequently able to impress for Belgium at the World Cup.

But it’s not going perfectly so far, and the former West Brom player hasn’t yet been able to shine for his new club.

Monaco faced Angers at home on Tuesday evening, and in a surprise result they lost the match 1-0. L’Equipe have picked out several players and branded them a ‘flop’ for the match, with Chadli being one of them. 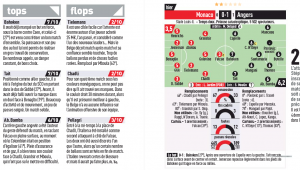 The French newspaper are known to be tough with their marks, but it’s still significant that they gave the Belgian international just 2/10 for his performance.

Nobody on the pitch was rated worse.

L’Equipe say that Chadli, who they point out has now played four Monaco matches since his West Brom exit, had ‘no influence’ on the game.