Moussa Dembele’s potential Celtic exit is once again being pushed by Sky Sports. After making an over the top fuss around the player at the end of the winter window, Sky have repeatedly given perhaps more attention than is deserved to Dembele’s Celtic Park situation.

That’s not to talk down the player, Brendan Rodgers has done very well with a youngster who was already well respected when arriving at Celtic, but the interest, and potential immanency of a deal doesn’t seem to match Sky’s coverage.

Take Marseille, the French club have been linked sporadically this summer, and they’re the ones Sky are pushing. However, claims that Marseille are currently holding talks with Dembele don’t fit with reports in France.

The French media are usually all over potential big incoming transfers but it was hard to find anything fresh on Dembele to Marseille on Monday, France Football conducted a poll of fans to ask if the move would be a good idea, and that was about it. 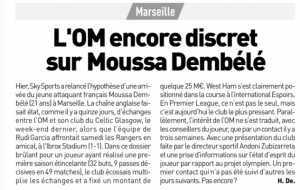 Tuesday’s edition of L’Equipe explains that Marseille did meet with Dembele’s representatives three weeks ago, explaining the club’s project to them, a transfer ‘presentation’.

That meeting with the Celtic player’s agents wasn’t followed up, L’Equipe make a big point of saying ‘yet’. Celtic asking a fee of £20m seems just about reasonable for Marseille, but, despite what Sky claim, it may not be considered reasonable by the Scottish Premiership club.