Since the start of 2018, Simon Mignolet has been the second choice goalkeeper at Liverpool.

First he was behind Loris Karius and then behind summer signing Alisson Becker, whose arrival saw the German being loaned out to Besiktas.

Jurgen Klopp has used the Brazilian in the Premier League and the Champions League, while the former Sunderland man has been restricted to a solitary appearance in the Carabao Cup.

The 30-year-old is also a backup for Thibaut Courtois with Belgium and the Reds stopper got his second appearance of this calendar year when he played the full 90 minutes in De Rode Duivels’ 1-1 draw in the friendly tie against the Netherlands.

He expressed his delight to see the reception he received from the fans in Brussels.

“It felt good. Just like when the fans chanted my name. You know, after such a game you know why you train hard every day. I want to thank the national coach for this opportunity. It was good to be able to play again,” Belgian newspaper Het Laatste Nieuws quoted him as saying. 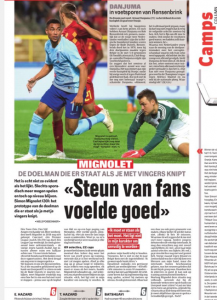 When Mignolet was also asked if he is now ready to return to Anfield and settle for a place on the bench, the keeper said: “First let me enjoy this. Then I turn the button again. You should always be ready to play.”

It looks like the Merseyside club’s custodian wants to put his situation at Liverpool on the side just a day after representing his country.

West Ham believe player could be ‘interesting signing’ this month –...