Parts of the Belgian media are currently rather interested in Sheffield United.

This is what prompted Gazet van Atwerpen to send a journalist to Yorkshire to see what they could find out about the owner, and to watch the victory over Leeds United. That resulted in a big article this week, which is really more about Sheffield United as a club and the culture, it seems like the journalist fell a little bit in love with aspects of the Blades and their support.

Gazet van Atwerpen have interviewed a string of Sheffield United fans, and even a Sheffield Wednesday one, about Prince Abdullah and his involvement with the club and they explain that every one is concerned about Kevin McCabe potentially leaving.

Co-owner McCabe and his family have invested heavily and have real local connections, which many don’t want to see lost.

Belgian journalist Patrick Vincent sat in the Kop for the match against Leeds United, and was next to a fan called James who told him: “McCabe was born and raised in Sheffield and has always been a fan of United. We knew he wasn’t in it just for the money. His heart was also here at Bramall Lane. Of the latter we are not at all so confident with the prince. We almost never see him in Sheffield.”

McCabe is described for the Belgian readers as a ‘Sheffield Lad’ and the traditions around the club are explained. Vincent is clearly impressed by the chant and it’s printed in full in the newspaper: ‘You fill up my senses Like a gallon of Magnet, like a packet of woodbine, like a good pinch of snuff. Like a night out in Sheffield, like a greasy chip butty. My Sheffield United, come thrill me again.’

The chant is described as ‘world famous’ and ‘unforgettable’, clearly leaving a mark. Unfortunately the chip butty also did: ‘Never make the mistake of ordering a chip butty when you are in Sheffield. It is no more than a double buttered toast with greasy fries in between.’ 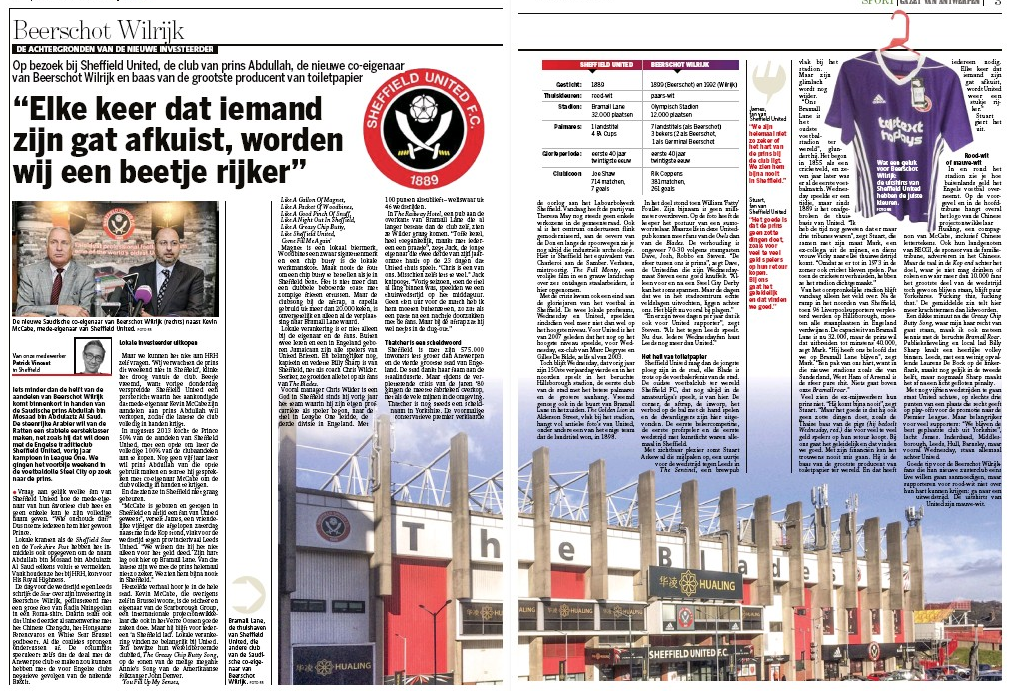 Jack, the landlord of the Railway Hotel near the ground, had a story for The Belgian newspaper about Chris Wilder: “Nice guy, very accessible, has a chat with everyone. Chris is one of us. Maybe even too much. Last season, when the title was already done, we played a home game at noon. Less than ten hours before the match, I had to put him out, as he was sat down after a night with the fans. But at the kickoff he was neatly in the dug-out.”

They even found a Sheffield Wednesday fan called Steven to speak about the rivalry: “Only before and after a Steel City Derby can it sometimes happen (the rivalry turn nasty). But the days when we fought real battles in the city centre are behind us. It’s now mainly teasing. And there are two days a year that I also support United, if it is against Leeds. So now (the day of the Leeds match), every Wednesday fan hates Leeds more than United.”

A Sheffield United fan called Mark was eager to speak about the Prince’s promise to keep the club at the same stadium: “He has promised us we’ll stay at Bramall Lane. A place of our hearts, because in those new stadiums such as those of Sunderland, West Ham or Arsenal, the atmosphere is pure s***. Nothing goes above our Bramall roar.”

Another fan, Stuart, added: “He hardly ever comes, but the good thing is that he doesn’t do any foolish things, like the Thai boss of the pigs (Sheffield Wednesday) who buys players for far too much money. With us it is gradual and we like that. With his finances it can never go wrong. He is the boss of the largest producer of toilet paper in the world. And everyone needs that. Every time someone clears his hole, United becomes richer again.”

Belgian journalist Patrick Vincent has clearly been impressed by the Kop, even if he does say it’s ‘f***ing this, f***ing that’ all the time. The Bramall roar when ‘local lad Bill Sharp’ scored against Leeds United is highlighted for the Belgian audience, as, once again, is the chant, with made Vincent’s hair stand on end.

Sheffield United may be getting some new fans from Belgium.