Unless you’ve been living under a rock somewhere, you’ll be aware that Patrick Cutrone’s loan at Fiorentina isn’t going to plan.

Struggling to fit in at Molineux after his surprise transfer from Milan, the striker was sent back to Serie A with a purchase to buy in hope he would rekindle his form and make Wolverhampton Wanderers a quick profit.

That hasn’t happened, however, which has left the Premier League club with a task on their hands they didn’t really want: finding him a new club.

It’s explained in Corriere dello Sport that, for Fiorentina, ‘the priority is to find, in agreement with Wolves, a destination for Cutrone’.

They add Sampdoria are after him, but ‘eyes on Benevento’, who could also sneak in with a deal, where Filippo Inzaghi could be the ideal man to give the Italian striker a boost. 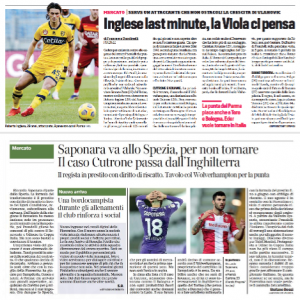 However, Corriere Fiorentino do feel it’s Claudio Ranieri’s side who have the advantage, claiming the Genoa based club are ‘in the lead’.

Regardless of what happens, Cutrone’s next move will be one approved by both Fiorentina and Wolverhampton, according to the latest reports.

Well, it’ll mostly be Wolves, because the Serie A side just want him off the books and we’re not sure they’re all that fussed where he ends up.