Finally. Filip Krovinović is once again a West Brom player.

After months of talks with Benfica over a deal for the midfielder, the Baggies and the Lisbon club reached a compromise at the weekend. Reports from Portugal on Monday explained the confirmation was imminent, with the Croatian having been allowed to travel to England to complete the formalities of the move.

The announcement was expected on Monday, yet typically for this saga it took a little longer, with West Brom informing their fans on Tuesday morning. In the announcement from the Premier League club, it was just stated Krovinović would be joining on loan for the season.

Portuguese newspaper Record have been able to reveal the finances of the deal. They state West Brom are paying £500k for the loan period, and should they manage to avoid relegation to the Premier League, then a further £750k will be payable, as long as the player starts half the matches.

There’s no clarification if that’s half the matches from now or in total. 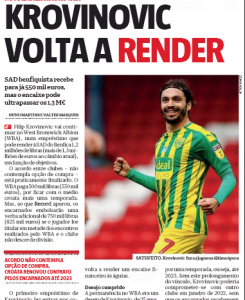 There’s no purchase option, which is a gamble for both clubs. Benfica had wanted an obligatory clause, and the Baggies refused to this unless it was scrapped in case of relegation.

No clause means a good season from Krovinović could see Benfica sell him for more than they would have otherwise committed to, whilst a bad season sees the value of their asset drop.