Diogo Jota to Wolves has taken a surprisingly long time to make its way to the Spanish media.

The 20 year old’s proposed loan move to Wolves started in the local media, and was covered in the player’s native Portugal the following day, all with a conviction the transfer is happening.

Yet there’s been very little in Spain, other than articles ‘according to the English media’. Jota is owned by Atletico Madrid but hasn’t actually played for them, and spent last season on loan at Porto.

The youngster isn’t away with the Spanish club’s preseason tour, with the most senior Atletico reporters, so perhaps he’s been forgotten a little. 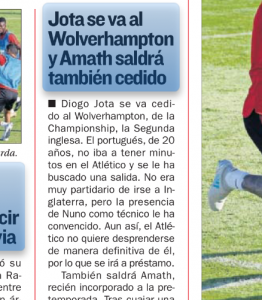 AS have done a little digging and publish an article on Jota saying he’s ‘not very keen’ on signing for Wolves, or at least he wasn’t at the outset.

Nuno Espirito Santo has been ‘decisive’ in changing things, and should everything complete, it won’t be the first time this summer the former Porto manager has dragged a Wolves transfer across the line.