When the negotiations were first reported by the Portuguese press, the stories said Benfica would not loan the player with a buying option, since he was just signed by the Lisbon side and their intention was just to let him get playing time somewhere else for six months.

But now it turns out that there is a clause, at least according to Portuguese newspaper A Bola today. In a big story about the player’s move, they say Crystal Palace have the right to purchase the midfielder at the end of the season for €10m.

Rakip belonged to Swedish side Malmo until the end of the year, and chose not to renew his contract in order to make a move to a better league. Now it seems he’s making not one, but two upgrades in his career. 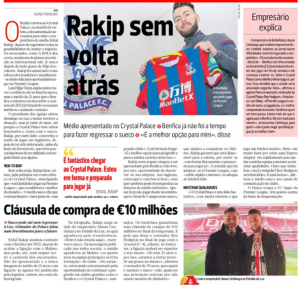 Benfica had no intention to add him to the squad in the middle of the season at first, and even though they changed their mind once one of their midfielders was injured, that was too late and Rakip had already been presented by Crystal Palace.

Roy Hodgson’s quote saying the club is ‘investing on the future’ is taken by A Bola as a sign that Rakip shouldn’t only spend six months at the London side.