Javier Tebas, president of La Liga, will not let PSG, and also Manchester City, out of his sights.

As he feels is part of his job, Tebas plans to force football’s governing bodies to make sure the two clubs stick to rules for funding, and he’s convinced that’s currently not the case.

Whilst Tebas has been accused of sour grapes over Neymar’s transfer to PSG, he insists targeting the French club and Manchester City is something which he started prior to that, and he’s got a solid case to back himself up on the timeframe.

Whilst Tebas’ sights are more firmly on PSG right now, with it being considered they’re more flagrantly breaching the rules, any sanctions and possible bans would also be of interest to Manchester City, and that’s why the Premier League club are brought in.

Speaking to L’Equipe, Tebas explained: “We see that PSG and Manchester City, over the last five years, are the clubs that have invested the most in the purchase of players.

“Since their real incomes do not allow them to make such investments, they have invented fictitious, state-linked sponsors with amounts that do not match market prices. We compared the income of PSG and City with those of Real Madrid, Barca, Manchester United and Bayern. They are superior… At PSG, sponsorship revenues are tied to Qatar, directly or indirectly, and are superior to those of Manchester United… PSG continues to cheat economically.” 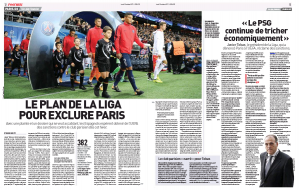 L’Equipe put it to Tebas that he wouldn’t be so bothered if a Spanish club did the same:  “I would say the same thing. We are in an industry. We cannot cheat. If, in Spain, there was a club like PSG, owned by a state, I would not want it in my competition. It would not be the competition of La Liga, but of this state, of which we would become dependent.”

The French newspaper then stated Real Madrid and Barcelona had benefitted debt write-offs in the past, to which Tebas said: “This is not true. These are things that were invented. But even if it were true, it would have been bad too. It’s not a case of we would have done sh*t so we should let others do sh*t.”

Should PSG or Manchester City be found not to be in compliance with spending restrictions, then Tebas believes they should be kicked out of UEFA competition as soon as the fault is found, even if it’s during a season: “They must not be allowed to compete. If, during the season, you realise that they cheated economically, why not exclude them? When a cyclist is convicted of doping, he is immediately excluded from the race. I also think controls should take place before the start of the competition, not after. Otherwise, the damage is done.”