With Fernando Torres retiring last week, he now finds himself in the period where he has to reflect on his career.

And with a career as successful as the Spaniard’s there’s plenty for him to look back on fondly.

He’s played for his boyhood club, Liverpool and Chelsea – two of the biggest clubs in England, another massive club in Italy and even ventured over to Japan. There’s plenty there for him to be proud of.

In the second part of an interview with AS today, Torres looked back on his career and spoke about all the clubs he played for. Everyone one them comes out with a glowing reference, except Chelsea.

For example, Torres describes his time at Liverpool as ‘a dramatic step’ and says his time there was ‘a feeling I do not want to lose nor forget’. Milan are described as a ‘great club’ despite his short and unsuccessful time there, while Sagan Tosu were an ‘amazing experience’.

Even his second spell at Atletico Madrid, which was nowhere near as successful as the first, he describes as ‘the best stage of all’.

Chelsea, however, are described as the club that ‘gave me what I always longed for; the titles.’ Nothing more, nothing less. It’s an icy response from Torres, particularly given how gushing he is about Liverpool. Even the other clubs, like Milan, come out of it well. 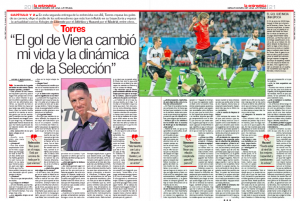 It’s perhaps further evidence that Torres regrets making the move to Stamford Bridge. He’s suggested as much before and recently discussed how he wishes he had gone about the move differently.

Chelsea may have been the club where he won the titles he craved, but it seems, if he could do things again, the move to London may never have happened.