We haven’t done a Felipe Anderson round-up from Italy in a while, mostly because there’s not been a lot to discuss.

West Ham’s offers have remained below what Lazio are asking for, meaning it’s just been a game of chicken, trying to see who will cave in first.

Il Tempo on Tuesday explain the Hammers’ latest bid of €35m + €7m is still under the Serie A side’s threshold, but they have Felipe Anderson on their side.

The Brazilian has already agreed a €3.5m/year contract with the Premier League side, according to the claims, and he’s said to be trying to convince Lazio to let him go, clearly wanting them to accept what’s currently on the table. 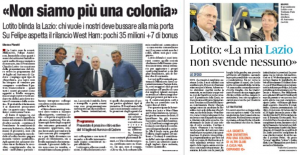 The local newspaper believe West Ham will need one more increased offer to get the deal done, with the next few days ‘decisive’.

Il Messaggero don’t have that much of a detailed update, but they do make it clear that Lazio have other options at their disposal (namely Monaco and Valencia) if the negotiations with the Hammers were to collapse entirely.

The message remains the same: give us the money we’re asking for, and Felipe Anderson is yours.

The question is: how much do West Ham want the Brazilian?