Thursday was a big day in the Kalidou Koulibaly saga, as Aurelio De Laurentiis admitted publicly he wouldn’t turn down big offers for his players anymore.

That will have been music to the ears of those in charge at Manchester City, who have already seen one (or two, depending on the sources) bid(s) turned down for the defender.

And yet, despite those words from the Napoli owner, the Serie A side will not let him go for peanuts either.

This is what Il Mattino are reporting on Friday, first revealing the centre-back has been offered a four-year contract from the Premier League club worth €7.5m/year.

However, Napoli have only received ‘very low’ offers, which haven’t been enough just yet.

The Italian club ‘know Koulibaly wants to leave, they want to sell him but not undersell him’, which they’ve made clear to his agent Fali Ramadani: ‘either the offer is upped or Koulibaly stays here’.

As for Gazzetta dello Sport, they feel tomorrow could be key with the aforementioned representative set to meet De Laurentiis in Capri.

The belief was the meeting was to take place earlier this week, but Ramadani’s first port of call was to chat with Maurizio Sarri following his sacking from Juventus. 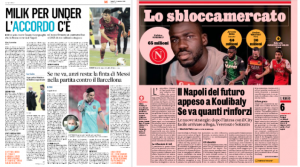 Phone conversations took place on Thursday (‘no progress’), but there is a ‘feeling that in the end the negotiation will soon be unlocked’.

‘There are a few million in difference at stake’, but Napoli know that with €65m or so in the bank, ‘it will be possible to act on the market and complete the squad’ in the way Gattuso wants it to be.

Gazzetta explain that De Laurentiis’ words on Thursday ‘leads us to think that the president will accept the offer from City in the end, perhaps hoping to raise the figures and payment conditions a little first’.

It’s certainly all positive, but we’ll have to see if De Laurentiis sticks to his word.