Unless something rather important changes in the coming months, Sergio Agüero will be leaving Manchester City at the end of the season.

The Argentine striker has struggled with injuries throughout the 2020-21 campaign, making just eight appearances in the Premier League so far, during which he’s scored one measly goal, coming from a penalty in a recent 3-0 win against Fulham.

At the Etihad since 2011, it wouldn’t be surprising if the 32-year-old ends up seeking one last challenge in Europe before returning to Argentina, meaning a few clubs are circling to try and secure his services on a short-term deal.

One of those has been Barcelona, who wouldn’t mind pairing Agüero with a certain Lionel Messi, but there’s also Juventus.

The Serie A side are looking at options who could help Cristiano Ronaldo next season, and the Argentina international is one of two names they are seriously considering, with the other being their former starlet Moise Kean. 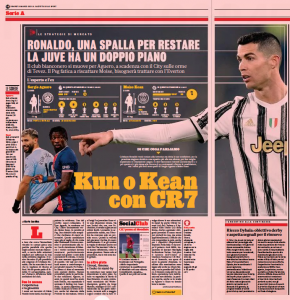 Gazzetta dello Sport are the ones reporting this on Friday, explaining Agüero’s ‘feeling with Pep Guardiola has waned’, and the striker ‘could follow in the footsteps of Carlos Tevez, who also landed from the Premier League at a mature age’.

The now 37-year-old also swapped Manchester City for Juventus, doing so in 2013, where he stayed for a couple of seasons before returning to his home country.

During his time in Turin, Tevez scored 50 goals and assisted another 19 in 96 appearances, so if Kun Agüero can do that for them for a couple of years and help Ronaldo break a few more records, it will all have been worth it.