Home Europe Fear of ‘hooligans’ – Spanish paper on how Madrid is preparing for...
SHARE

The front page of Monday’s edition of Marca hypes the fear in Madrid over Tottenham and Liverpools fans arriving for the Champions League final.

Inside, a headline reads: ‘Fear of the “hooligans”‘

For years, the Spanish media have loved to use the word hooligans to describe travelling English football fans, despite Spanish fans within their own country being involved in repeat incidents in recent years.

The hooligans label had dropped a little, but after some of the scenes when Liverpool travelled to Barcelona, they’re ready to jump back to the word again. It didn’t take a lot.

There’s a ‘general suspicion’ ahead of the supporters arriving, explains Marca. Liverpool’s fan zone will be around Avenida Felipe II, and the Spanish newspaper says bar managers there have spoken about a fear of ‘violent hooligans’.

The area has experience of hosting travelling fans for Real Madrid basketball matches, but this is entirely bigger level.

Given the fear, some bars are considering closing for the whole weekend. An unnamed owner is quoted as saying: “We are evaluating closing the premises on Saturday and we know that other colleagues in the area have already decided. It does not compensate us because the security of the premises is not guaranteed. If we already had problems with 50 or 100 Serbs who came to see the basketball… It closes and reopens on Monday and we heal in health.”

Tottenham fans will be in the Colón area, and the manager of the Hard Rock Cafe told Marca: “If we normally have a person from private security, from Thursday to Sunday we will have eight. We are afraid of the same thing that happened last season in the semifinals against Roma – there were great disturbances between Liverpool and Italian fans – and that is why we reinforce ourselves.” 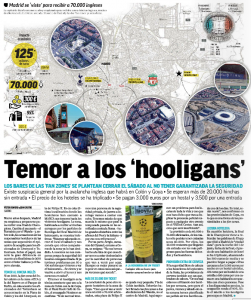 Some of those who work in the bars and have experience of big football events, believe the areas given over to fan zones simply aren’t big enough and the authorities should have chosen other areas outside the city centre.

The fans will bring money, that’s a positive which isn’t being ignored, and extra beer orders have been placed to make sure it doesn’t run out.

Liverpool fans seem to be getting more of the attention because of what happened in Barcelona, and, unfortunately for those who will now travel, that will likely lead to tougher policing.