Earlier on Monday, we covered a story from Gazzetta dello Sport stating that Manchester United were ‘active’ in their pursuit to sign Federico Chiesa from Fiorentina.

This came alongside a big mood-killer, which was that the player preferred to stay in Italy, suggesting Ed Woodward would need to be very convincing to make him choose otherwise.

Furthermore, it was claimed Fiorentina wanted €70m for their star and would not want to see players included as makeweights in any potential deal, meaning it was cash or nothing.

Well, Quotidiano Sportivo (QS) in La Nazione, also have an article on the matter this Monday, and they’re a tad more optimistic about Manchester United’s chances of landing the 22-year-old.

They report that out of all the interested clubs, the Premier League side have ‘gained the pole position’ in the race to sign Chiesa, doing so through them being the ‘only club to talk about only and exclusively money up front’.

Their offer of somewhere between €50-60m is ‘close, very close’ to what Fiorentina want for their winger, and it’s explained that if they come ‘knocking at the door’ with a ‘take it or leave it’ bid of €60m, then Rocco Commisso and those in charge at the Serie A club could ‘seriously waver’. 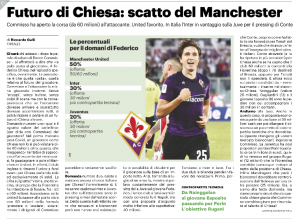 As for the competition, QS state there is ‘technically’ some from Italy, but the issue remains the insistence of Inter and Juventus to add players in the transaction to lower the transfer fee.

As things stand, the newspaper feel there is a 50% chance of Manchester United coming out victorious, labelling them as the ‘favourites’, while Inter are at 30% and Juventus make up the remaining 20%.

It’s certainly positive news compared to what Gazzetta had to say, but even if the Red Devils do convince Fiorentina with the right offer, there remains the big obstacle of doing the same with Chiesa himself.