Timothy Castagne returned to action in Leicester City’s 2-1 victory over Norwich City at the end of August after suffering an injury while with Belgium in June.

The 25-year-old started as a right wing-back against Russia at Euro 2020 and had to leave the pitch before the half-hour mark with a damaged eye socket, sustained from colliding with Daler Kuzyayev.

Het Belang van Limburg interviewed his parents, Pierre Castagne and Clarence Verougstraete, and they said they immediately knew the injury was serious.

“I immediately knew it was serious. Otherwise Timothy would never voluntarily leave the field,” his father said.

“The doctor of the national team then informed Camille (his girlfriend) and she passed the news to the rest of the family. I was a bit in shock because it was serious. For two hours Tim wept with disappointment and then he turned the switch and his focus went to rehab.”

Regarding the incident, the Foxes player’s mother explained: “Normally Timothy stands up straight away, but not then… I saw his face and knew it.”

“It was very emotional. We really wanted to see him. It was necessary. I cried a lot, and so did his sisters.”

When detailing the extent of the injury, Pierre reveals his son’s career could have been brought to an end, if the point of impact was ‘three inches higher’.

“The impact was absorbed by his eye socket, hence the fracture. But three inches higher and it was his brain that had absorbed the shock. That [would have been] was much worse, because then he would have suffered a brain injury,” Pierre explained.

“A week later he went for a check-up. The surgeon repeated there that he was lucky, that the operation was delicate and that he had done his job with it. Fortunately, he was pleased with the result. Now, Timothy is just standing there again.”

Brendan Rodgers’ man has not only returned to action for Leicester, but he also played the full 90 minutes for Belgium during their 3-0 win over the Czech Republic.

Timothy’s mother admits she struggles to watch her son back on the pitch without being ‘carefree’. What his father can’t accept is the lack of coverage in the media regarding the incident.

“I have also been a footballer, you know that such things are part of it. If Tim had to stop playing football? Then that’s just how it is,” he stressed. 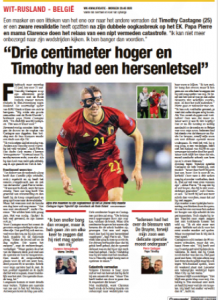 “But you know what I don’t understand? That after that collision there was so little attention in the media and in Belgium for my son. Everyone kept talking about Kevin De Bruyne’s injury, while my son had to undergo a very delicate operation. I do know: he is still young, is a defender, does not have the KDB status and his replacement Meunier did well. But it’s still bizarre that no one paid any attention to him after such a serious injury.”