Donny van de Beek was last week dragged into the Christian Eriksen transfer saga, with it being suggested the Dutchman and Dane could be exchanged.

This brought much hilarity to Manchester United supporters, but the theme is continuing in the Italian media. Monday’s edition of Corriere dello Sport reports the move would be a ‘dream’ for Inter Milan.

The idea would see Eriksen moving to Old Trafford on a loan deal for the rest of the season, and Van de Beek going the other way, also on a temporary basis.

Corriere say Manchester United see a big future for the midfielder so wouldn’t want to let go of him entirely. A move to Italy would be for his development, but it’s not clear why it’s thought he could develop better in Milan than where he is, even if he did get more minutes. 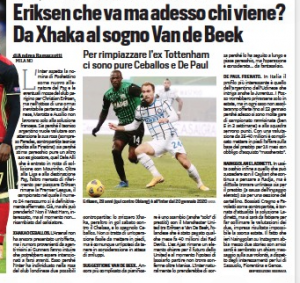 The Italian newspaper are well aware how difficult this transfer would be, and they term it ‘fantasy football’.

Inter Milan were interested in Van de Beek when he was at Ajax, and whilst their admiration continues, there’s a dose of realism being thrown on things.