Home Europe “They have an extremely good tactic” – Fulham player on why Tottenham...
SHARE

Fulham must have thought they’d secured a point against Tottenham Hotspur on January 20th.

Claudio Ranieri’s men had gone one up, thanks to an own goal from Fernando Llorente, and after an equaliser from Dele Alli in the second half, they were level when the match went into injury time.

A very late winner from Harry Winks snatched all three points for Mauricio Pochettino’s side, and left a mark on Andre Schurrle.

The former Chelsea player was on the pitch for the majority of the time, although not for the winner, and he believes how Spurs behaved that day can be a lesson for Borussia Dortmund.

The Bundesliga club, who have loaned Schurrle to Fulham for two seasons, face Tottenham in the Champions League soon, and German magazine Kicker have asked the player how he thinks it may go.

Schurrle explained: “Even if Harry Kane and Dele Alli are missing, Dortmund should not underestimate Spurs. We played against them recently, led 1-0, and they did not let themselves be disturbed. They have an extremely good tactic, always stay cool. Everyone knows what he has to do.” 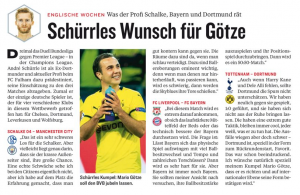 The 28 year old, who will be returning to BVB if Fulham are relegated this season, is of course backing the club to win the tie.

He especially wants a good pal to have a big say in it: “Of course, I especially wish my buddy Mario Gotze to decide things and confirm his form on an international stage.”