For the past week or so, various reports from the Catalan press have stated Barcelona still have Raheem Sterling on their radar for January, after failing to sign him in the summer.

The winger is unhappy with limited playing time at Manchester City and has already said he will consider moving elsewhere if things don’t improve for him at the Etihad.

Pep Guardiola has refused to assure to the 26-year-old of more minutes and has urged him to do his talking on the pitch.

Saturday’s edition of Mundo Deportivo claims the La Liga side have the former Liverpool man as ‘one of the options’ to strengthen the squad in the winter market.

Ousmane Dembélé’s contract expires in 2022. His ‘extreme situation’, which has seen his agent refuse to accept the Spanish club’s renewal offer so far, has seen Barca still have Sterling on their agenda.

If the Frenchman decides not to sign a new deal, Ronald Koeman’s side plan to place him on the market at the start of next year. 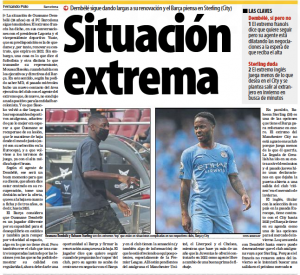 Mundo say what will happen to Dembélé can ‘trigger’ the Blaugrana to ‘go after’ the England international.

In other words, Barca will look at Sterling, if the former Borussia Dortmund refuses to sign an extension in the coming months.