However, they want their club doctor Hans-Wilhelm Müller-Wohlfahrt to give an assessment of the injury and its healing process. If the doctor gives Hudson-Odoi’s recovery the ok, then Bayern will proceed with their transfer efforts.

Bild don’t make it entirely clear how the doctor will assess the player’s injury, but the only real way to do it would be a meeting with the player, otherwise they could simply refer to Google.

Meeting with the player is backed up by sports physician Thorsten Dolla, who told Bild: “The exact assessment of the player is a must for the interested club. What does the Achilles tendon look like? Is the scar irritating? You also look at the surgical report.”

Hudson-Odoi and Bayern are said to have a general agreement on a transfer, and the German newspaper state the Bundesliga club are looking at €25m as a transfer fee, ‘because of the serious injury’. 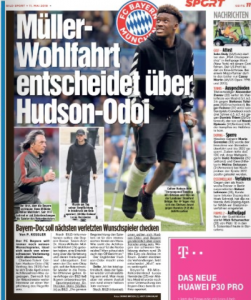 Talks with Chelsea have ‘stalled’.

So, Bayern want their club doctor to assess a Chelsea player, at a time they’re not even in serious talks with the Blues, to see if it’s worth signing him… and even then on a cut-price deal.

There’s arrogance, then there’s this.