In October 2017, Birmingham City joined hands with Spanish side UE Cornellà and this ‘special link-up’ was done to ‘aid player and coach development’.

Cornellà are currently in the Segunda División B, in the shadow of Barcelona and Espanyol in Catalonia.

AS on Wednesday explain the lower division Spanish side’s ‘grassroots football’ is attracting attention from within their country and also internationally.

Over the past few years, several youngsters have come up through their ranks and made a name for themselves in other leagues. The newspaper even suggests Cornellà has the best academy in Spain.

It’s claimed Cornellà’s ‘successful model’ caught Birmingham City’s attention a few years back, which is why they entered into a partnership. This was done with an intention to strengthen both club’s academies and ‘it is being achieved’. 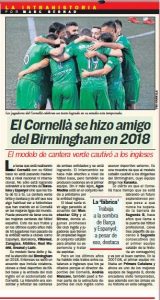 AS state the deal also allows the Championship side into the ‘shareholding of Cornellà’.

They even compare it with the partnership Manchester City have with Girona [share same owners], and the Citizens have allowed some of their players to join the latter on loan deals.

The report then points out there have been ‘more deals’ with Cornellà and Birmingham in recent years and that’s because of the former’s sporting director, Andrés Manzano, has also become part of the English side’s sports structure ‘as an external advisor’.

AS add this is a sign the Spanish club’s model ‘captivated’ Birmingham City.

Marca also cover the partnership between the two clubs and have gathered comments made by Cornellá technical secretary Juan Giménez. 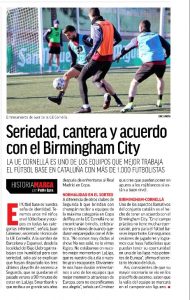 Regarding the agreement Cornellá have with Birmingham, Giménez said: “On the pitch, it does not have much impact, but for grassroots football it is important.”

“We secure player transfers and we ensure that there are footballers who can have their chance in one of the most powerful leagues in Europe.