Leeds United have long been interested in Vålerenga goalkeeper Kristoffer Klaesson and a Whites approach in 2020 was turned down by the Norwegian club.

Marcelo Bielsa’s side still have the 20-year-old on their agenda for this summer as they need to bring in a new custodian following Kiko Casilla’s loan move to Elche CF.

On July 13th, Nettavisen reported the Premier League side have ‘concretised’ their interest to sign the player.

A week later, Vålerenga sporting director Jørgen Ingebrigtsen revealed his side have held ‘good dialogue’ with the English club for Klaesson’s transfer and his manager, Dag-Eilev Fagermo, also admitted he would be happy if the keeper seals a switch to Elland Road.

Reports in the British press have also stated there were ‘good talks’ between Leeds and Vålerenga, and the Norway U21 international could fly to England this week to undergo medical tests. 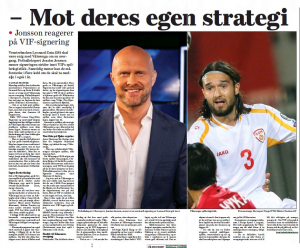 Dagsavisen have relayed claims made in England and have also taken views of former player and coach, Joacim Jonsson, who is also a football expert for the newspaper.

Jonsson feels ‘positive’ of the English reports and regarding Klaesson’s potential transfer to Leeds he said: “It’s a magical agreement for all parties”.