During the summer transfer window, Everton were linked with a move for Malcom.

In mid July it was reported in France that the Merseyside club were ‘ready to offer €31.5m + bonuses’ to Bordeaux.

It all depended on Ademola Lookman leaving the club, since that would provide a space and some transfer funds.

The 21 year old didn’t go anywhere, and in the end Malcom moved to Barcelona for around €40m, having been so close to AS Roma that the club announced they’d reached an agreement.

In January it was reported in Spain that Everton had contacted the player’s entourage about a possible transfer, but he wasn’t interested at the time.

This season Malcom has one start in La Liga and seven substitute appearances, in all that he’s had 129 minutes. Added to that he’s got 376 minutes in the Copa del Rey and 29 in the Champions League.

There’s been three goals in there but the transfer hasn’t yet worked, that’s plain to see.

The player is said to be considering his future, and Everton get a mention from Marca, but there’s one detail which jumps out more than any… Barcelona want €70m. 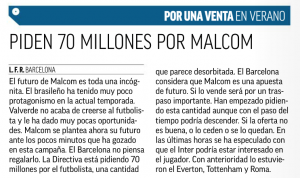 It’s said the Catalan club see the 22 year old as a ‘bet’ for the future, yet there doesn’t seem to be a great deal of evidence to suggest manager Ernesto Valverde thinks anything of him.

Even Marca call it ‘exorbitant’, and they’re not wrong. There’s no way Barca could convince Everton or anyone else to pay with €70m for Malcom this summer, although the Yerry Mina deal may have convinced them miracles do happen.