Home Europe Exciting prospect’s €45m release clause ‘may not be enough’ to scare off...
SHARE

Sporting fullback Nuno Mendes, who’s been standing out for the Portuguese side this season, is in the final stage of recovery from an injury, so all local newspapers have stories about him potentially being available for Saturday’s game.

However, Correio da Manhã goes a little further, and talks about what could be of his future in the January transfer window.

They recall that the likes of Liverpool and Manchester United are both interested in the 18-year-old, and could take him away from Lisbon very soon.

Sporting are said to be working on a new contract for him, since his current release clause is of €45m, and that ‘may not be enough to back off’ the European giants.

Manchester United have been using Alex Telles and Luke Shaw for the left-back position. The Portuguese press recently pointed out that even though the Red Devils have just brought the Brazilian, that didn’t stop them from watching Nuno Mendes. 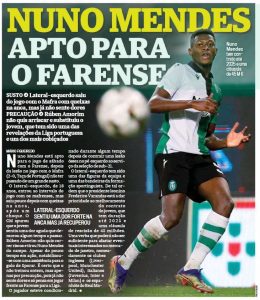 Regarding Liverpool, it’s Andy Robertson who started all league games for the Reds this season. When he’s not available, it was mostly Konstantinos Tsimikas who’s been used by Jurgen Klopp.

Besides the Reds and Manchester United, Nuno Mendes is reportedly being followed by Atletico Madrid, Juventus, Inter Milan and Milan as well.