Viktor Gyökeres joined Brighton at the beginning of the 2018 January transfer window, after the deal was agreed some months before.

With the 20 year old arriving from IF Brommapojkarna in Sweden he wasn’t expected to initially trouble Chris Hughton’s first team plans much, and was sent to develop with the U23 squad.

Short of a couple of bench appearances in the Premier League, a minute against Bournemouth in the FA Cup, and the full EFL Cup match against Southampton, the striker has been with the development squad.

That’s why Brighton have allowed him to join up with Sweden’s January national team tour, during a break in matches in the country.

National manager Janne Andersson has been impressed, and is quoted by Aftonbladet as saying: “I talked to Brighton’s manager and he told me that Viktor is taking big steps all the time. He is a different type and it is fun to see. 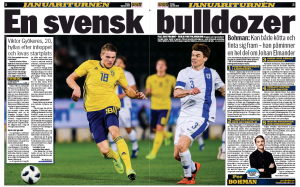 “He is a very direct striker. A powerhouse. He does a lot of really, really good stuff.”

Simon Thern, a midfielder for the team, added: “Viktor has something very exciting about him. Powerful, strong and a nice touch. I wouldn’t want to meet him as a defender. It’s actually the first time I see him playing.”

It all sounds good for ‘The Swedish Bulldozer’.