Home Championship Excitement in Portugal over Wolves’ ‘Rolls Royce’ and how supporters have fallen...
SHARE

As we cover here week after week, the Portuguese media love their players.

Local outlets are always following the steps of the stars who play abroad, especially those who are featuring in the Premier League or Championship.

But what do they love more than their players? The affection of others for these same guys. Every praise from the foreign media is a reason for them to make a big story.

Ruben Neves is the star of the moment, getting a big headline in O Jogo today. The reason for it is the reactions that Wolves fans have been giving to the midfielder’s recent performances.

What O Jogo did was to take a look on social media and check what the Wolves supporters have been saying about Neves. And that’s obviously a lot of positive comments. 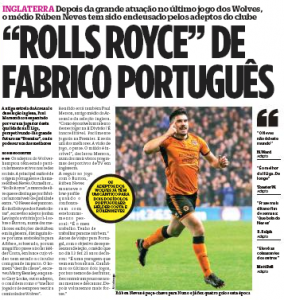 Some of the comments said Neves ‘is the best player to wear the Wolves’ shirt ever’, while others claimed ‘he’s the Rolls Royce of footballers’. As you can see, that’s what makes the headline.

O Jogo also took comments from Paul Merson and what they call ‘one of the most watched sports shows in England’, where the former Arsenal player claimed he can’t believe Neves is playing in the Championship.

Even though Neves played for a big club in Portugal, the local media seems happy that he’s succeeding elsewhere. And once he reaches the Premier League, that’s when they expect he will really become a star.

And then they’ll be falling over themselves to praise Wolves every day.