For Brighton & Hove Albion Women, there’s hope the name Léa Cordier will be one they can count on for years to come, having agreed to sign the 17-year-old ahead of next season.

The defender will move into the club’s U21s for a year, with the aim of impressing enough to try and get a spot in the first-team and therefore a professional contract.

Currently at Standard Femina, Cordier is waiting to see what the world situation is like in the next few months before making the leap into a new country and a new language.

Speaking to La Meuse in Belgium, the U19 international explained how the transfer came about.

She said: “My parents told me that once I was done with secondary school, I could focus on football for a year if I wanted, by going abroad, because they knew it wouldn’t be possible if I went straight into higher education for three to five years. Because they want me to learn a new language, we thought about the United States, but I didn’t want to go there, because it’s too far.

“We then looked at England, but in women’s football, it’s not like the men’s where scouts come to find you. Here, it’s my dad who send emails to various clubs. I did a trial with West Ham and was meant to have one with Brighton, but the pandemic cancelled it. My dad therefore sent videos of me with the national team. I know the club then asked the England U19 manager, who I played against in the last Euros.

“We then had a video call with the U21 manager with Brighton as well as the person who deals with transfers there. They explained the project to us, which was very interesting”.

The main issue is that since she will be with the U21s, she won’t get a contract, meaning no pay, either. 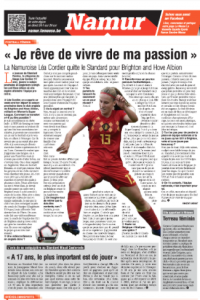 This means her parents will have to pay for everything, including housing, but they hope they can find a host family, ‘otherwise it’ll be too expensive’.

Since she isn’t 18 yet, the transfer won’t take place until August 9th, and they are now simply waiting for things to edge back towards normality so they can get to planning properly.

As for whether she’s happy about the transfer, she said: “Yes, very. I’m excited and a little bit scared at the same time. I’m going to turn up in a country by myself, in a new team, but I know once I’ll be there, it’ll go well.”

Cordier also made it clear that while it’s originally just for a year, she would stay longer if things go well and manages to make Brighton & Hove Albion Women’s first-team.

That’s extra motivation, on top of earning money and ensuring she, one day, manages to represent her country at the top level and, as she puts it, ‘live her passion’.