One loss in the first five matches of the new season isn’t likely to be considered as a crisis situation at most clubs, but that doesn’t seem to be the case at Real Madrid.

Los Blancos had to settle for a point against Real Valladolid and Villarreal in the league and reports coming out of Spain have indicated there’s tension between president Florentino Pérez and manager Zinedine Zidane.

Regarding Pogba, Manchester United were adamant the midfielder would not be allowed to leave, despite his and his agent’s insistence on leaving Old Trafford.

Former Real Madrid president Ramón Calderón has given an interview to Portuguese newspaper A Bola and claimed the Spanish side never made an offer for Pogba and his former manager Jose Mourinho is the reason behind it. The latter is without a club since United sacked him last December.

“In the short term, Mourinho will return to Real. They told him to wait six months,” Calderón said.

He said he was unsure whether Madrid are providing financial compensation to the manager.

“He [Mourinho] had proposals from China and France and he did not accept, as he is expecting to see what happens at Real Madrid.

“In the meantime, he is sending messages such as when Real calls you cannot say no or that when one is a Madridista once, he is that for a lifetime. 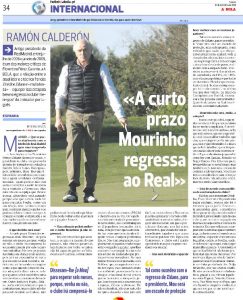 “Another clue is Pogba, Zidane urged them to hire him, but the club made no formal offer to Manchester United.”

The reasoning behind that is given as Mourinho’s stance over a player he had issues with.

Calderon isn’t a big fan of Perez, or Mourinho for that matter, and believes the manager’s return wouldn’t be for on the pitch issues: “As with the return of Zidane, for the president Mourinho will be a protective shield, a safeguard, a coach who, when he arrives, will automatically capture all the attention of supporters, will become the protagonist and will cause attention to be diverted from who is really to blame. Mourinho will complain about the referees, the calendar, UEFA, and be the controversial man we all know.”