Kevin Mirallas returned to Belgium and joined Antwerp after Everton released the winger in August.

Antwerp faced Gent in the last two matches and László Bölöni left the 32-year-old out of the starting XI for both fixtures.

In the clash on Sunday, the former Toffees man was seen walking towards the dressing room after having a conversation with his coach during the game.

This has been a topic of discussion in the Belgian press and his father, José Mirallas, has also commented on the drama.

Het Belang van Limburg have gathered comments made by Mirallas Sr and the Belgian newspaper explains it’s not the first time the player had run-ins with his coach as he had ‘difficult moments’ with Roberto Martínez and Ronald Koeman at Everton.

José gives an insight of his son’s difficulties with the current Netherlands manager, when the pair were at Goodison Park.

“With Koeman it was a sporting problem. He wanted Kevin to be more defender than attacker – that is of course not his game,” he explained. 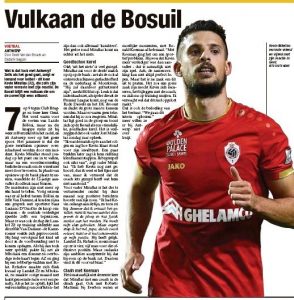 Mirallas’ father has now urged the attacker to put an end to the situation at Antwerp by apologising to his manager.

“Well, the collaboration cannot always go perfectly. But now it’s time to talk this out. It would be a good thing for Kevin to apologise, settle with the coach, and now throw himself into training. I do expect this to be resolved quickly,” José stressed.

Maybe Kevin Mirallas should start to realise that repeat disagreements with managers probably says more about him than those in charge at whichever club he’s at.