Home Europe ‘Everything was set’ – Tottenham were on verge of January signing, refusal...
SHARE

The January transfer window was filled with rumours regarding the future of Christian Eriksen. With things not going great at Inter Milan, the Dane star got linked to a move to Paris Saint Germain and even to a return to the Premier League.

Tottenham Hotspur were said to be in talks to have the midfielder back at the club on a loan deal, and apparently that wasn’t just a gossip, as Gazzetta Dello Sport brings more information on it today.

The newspaper has a piece claiming it wasn’t Eriksen’s fault for not completing a move in January, as Spurs had accepted to pay his entire wages.

The problem was that Inter Milan wanted some compensation for the loan, and the London side didn’t agree with it, making the move collapse. The request from the Italian side was made by the start of January and they never changed their stance. 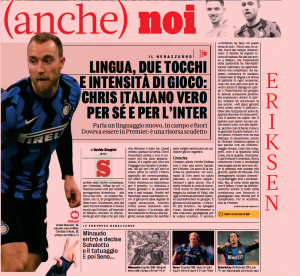 Gazzetta Dello Sport says the player was ‘almost sold’ as ‘everything was set’ to happen, so they basically blame the Nerazzurri for blocking it.

However, Inter Milan may not regret it, since Eriksen has been showing signs of improvement under Antonio Conte lately.

Now since the newspaper doesn’t say how much they wanted for the loan, it’s hard to judge whether Spurs did the right thing or not in leaving it aside.