Home Europe ‘Everything points to’ a transfer for Southampton target
SHARE

Spanish rumours over the future of Luciano Vietto continue, and it’s increasingly clear the player has a shaky future under Diego Simeone at Atletico Madrid.

Southampton are one of the clubs to be repeatedly linked, but the Premier League side have been interested in a loan move for the forward, and Atletico would like to let go of him permanently.

That could be a risk too far for Southampton, and Atletico’s desire to sell Vietto doesn’t do an awful lot for his desirability.

Despite being in the middle of a transfer registration ban, Atletico are keen to see Vietto leave the club. A loan, to Southampton or anywhere else, isn’t so attractive because the 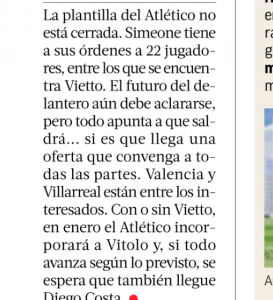 club have Vitolo arriving in January and would like to add Diego Costa to him.

Spanish newspaper Marca say ‘everything points to’ a transfer for Vietto, with Valencia and Villarreal named this time as potential destinations.

If Atletico can’t get the permanent deal they want and are prepared to listen to loan offers, one of which Southampton have already made, then the Saints could return to the table.