Home Premier League Chelsea Everything ‘points to an agreement with Chelsea’ – Frank Lampard closing in...
SHARE

This week’s edition of SportBild states the Bayer Leverkusen star is a ‘dream’ target for Frank Lampard this summer.

The 21-year-old wants to leave the Bundesliga side and will communicate that to the club’s leaders in the coming days.

Apart from the Blues, it’s stated Real Madrid, Barcelona and Manchester United were hoping to acquire the Germany international’s services. However, the report explains everything ‘points to an agreement with Chelsea’.

That’s because Marina Granovskaia is preparing a ‘concrete offer’ to sign the attacker. The Chelsea director has asked Bundesliga experts to find a way to reduce the player’s price tag, but Leverkusen are unwilling to deviate from their €100m asking price.

It’s claimed the next round of talks between the two clubs should focus on the details of the fixed fee and the bonuses, and Granovskaia is thinking of making an offer of around €70m.

It’ll be clear this weekend if Chelsea will qualify for next season’s Champions League, and this is a sporting criteria for Havertz. Therefore, more developments could be expected next week, with SportBild saying things should get ‘hot’.

Bayer are in contention to win the Europa League and according to SportBild, their plan is to retain Havertz until the end of this campaign. 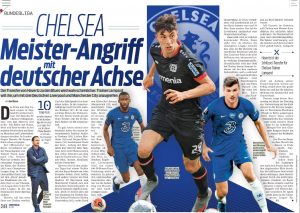 The English side will only be able to conduct his medical examinations after he plays his last match for Leverkusen.

This means the deal will depend on Havertz’s fitness (avoiding any injuries) and the big question is whether or not Peter Bosz’s side are willing to take such a huge risk.