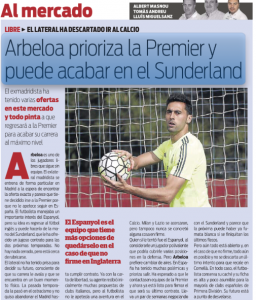 According to the transfer market section of Spanish newspaper Sport, Sunderland could be welcoming the signing of Alvaro Arbeloa soon.

The 33 year old came through Real Madrid’s youth system before playing for their C and then B teams. After graduating to the first team squad, Arbeloa was then sold to Deportivo La Coruna.

A short stay there led the player to the Premier League and Liverpool, before he returned to Real Madrid in 2009. In most recent years, Arbeloa has been a bit part player, perhaps best known for his social media spats with Barcelona’s Gerard Pique.

Now out of contract, Arbeloa is a free transfer waiting for someone, and Sport seem to believe that someone could be Sunderland. They state the Spaniard has several offers, but that ‘everything looks set’ for a possible transfer to Sunderland and David Moyes.

It’s repeated within their article that Sport believe a deal is close, although they don’t give a great deal of reason for this.

Sport is a Catalan newspaper, and Arbeloa is Real Madrid through and through, with the Catalan media mocking him repeatedly. Maybe they feel a Sunderland transfer is mocking worthy, but from the other side… Sunderland could likely do better than Arbeloa given the stage of his career.