Home Premier League Arsenal ‘Everything is lies’ – Manager and star player go on attack ahead...
SHARE

With Benfica currently fourth in the Portuguese league table, there’s of course a lot of pressure on manager Jorge Jesus and his squad.

Newspaper Record today had a front page claiming coach Jorge Jesus refuses to give up on the job, despite the serious meeting he had with president Luís Filipe Vieira last night.

Now as Jesus spoke to the local media prior to the Europa League clash against Arsenal, he was obviously asked about the situation, and claimed that the Eagles are surrounded by lies from the press.

“Write, Benfica sells, Jesus sells a lot. I know my responsibility and that of the players, which is zero. They didn’t give any more because they couldn’t,” said Jorge Jesus (via O Jogo).

“Now on TV, Benfica fans who attack us every day, do not give a word of comfort, constantly questioning players, coach, president. But is he to blame for this? If there are other things, I neither know nor want to know. I know about football. And I did not fail in this matter and I rarely fail.

“Rui Costa, me, and the president met yesterday, in fact we’re constantly talking about how to get out of this crisis. We believe a lot in what we can do, knowing that it is difficult, but we do not throw the towel on the floor.” 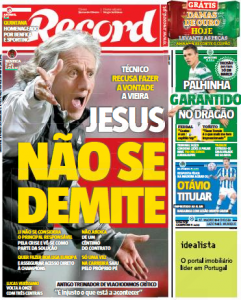 Benfica star Pizzi also spoke to the journalists in the pre-Arsenal press conference, backing up Jesus’ speech and saying the manager has full support from the squad.

“We fully trust the methods. Battles, fights are created, to see who’s to blame, because the group is no longer with the coach and I don’t know what… Everything is lies.

“From the first moment we are together, we’re not doing things as we should be doing, we could and should be better in the league taking into account the greatness of the club, but we’re very united and together to give back to this. All lies. Players, technical team and staff are paddling to win titles.”

Arsenal and Benfica now play the second leg of the Europa League’s round-of-32 on Thursday night. Following the 1-1 draw last week, the Lisbon side are in need of a positive result to make things calmer at the Estádio da Luz for at least a little longer.

“In the PL, at Tottenham” – Manager backed to take Spurs job, as agent works on move elsewhere

“In the PL, at Tottenham” – Manager backed to take Spurs...