Over the weekend, multiple reports coming out of Spain stated the deal to take Junior Firpo to Leeds United is ‘almost resolved’ for €15m.

Monday’s edition of Mundo Deportivo has a short update on the Barcelona player as they state his transfer to the Premier League side will be made official today, once he clears his medical.

It’s claimed Junior’s agent Sufiel Abdelkader ‘closed the deal’ with the English club, who will pay the €15m fee in two instalments. Due to the fee set to be paid in two instalments, there will be bonuses included in the operation.

The player is already in England and Covid protocols are becoming an obstacle for him to take his medical. 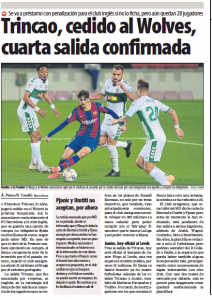 Despite this, the newspaper’s online edition explains ‘everything is ready’ for Junior to join Marcelo Bielsa’s side and his ‘official presentation as a Leeds player’ should happen on Monday.

The fullback will sign a four-year contract with Leeds and will have a ‘higher salary’ than he received at Barcelona.