Home Championship ‘Everything is clear’ – Club have agreement in place with Birmingham City...
SHARE

Jude Bellingham became the youngest player at Birmingham City to make his debut for their first team at the start of this season.

The 16-year-old has continued to feature regularly this campaign, making 35 appearances in all competitions.

His performances have drawn attention from elsewhere, particularly from Manchester United and Borussia Dortmund.

Various reports from England and Germany have talked about interest from the Red Devils and the Bundesliga side in the young midfielder.

This week’s edition of SportBild has an update on the teenager and it’s not good news for Ole Gunnar Solskjaer’s side.

‘With Bellingharn everything is clear’ is what the title reads and a short update within the small report explains Lucien Favre’s side have an agreement in place with the player.

This has been claimed before in Germany, and despite the confidence, there’s a chance Manchester United and other contenders aren’t out of the picture yet. 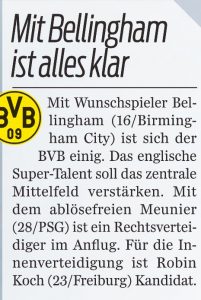 The report does not mention anything about an agreement with Birmingham City specifically, or the potential size of transfer fee or compensation required.