David Silva’s contract at Manchester City will expire this summer and he has already confirmed this will be his final season at the Etihad.

The Spaniard has been linked with AC Milan and also clubs outside Europe, mainly David Beckham’s Inter Miami and Al Sadd SC from Qatar.

Speaking to ‘Mister Chip’ last month, the 34-year-old admitted his family have started to “ask questions” and therefore, he needs to sort out his future as soon as possible.

Journalist Miguel Rico, writing on the back page of today’s edition of Mundo Deportivo brings a short update on the player’s future.

He states ‘everything indicates’ Pep Guardiola’s man will join Qatari side Al-Duhail SC.

Al-Duhail are Al Sadd’s direct league rivals and the latter are managed by Silva’s former national teammate, Xavi. Rico adds the City attacking midfielder will be his compatriot’s ‘rival’, if he moves to the Middle East. 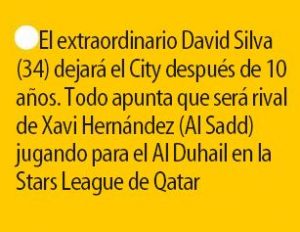 The ex-Valencia man’s current deal with the English champions runs down on June 30th and with the 2019/20 season delayed due to the Covid-19 crisis, the player could extend his stay to finish this campaign with Manchester City.