Home Premier League ‘Everything’ being done to get Newcastle transfer over line, could be done...
SHARE

Chancel Mbemba has struggled to get regular playing time at Newcastle United last season. But that has not stopped him from attracting interest from clubs in Belgium.

DH reported on May 30th that his former club Anderlecht, along with Standard Liege and Club Brugge are all interested in signing the African defender and want to make him the highest paid defender in the league.

A report from the same outlet on June 5th suggested Anderlecht have come forward with an offer that is ‘enticing’ and ‘interesting’.

According to the Belgian publication Het Laatste Nieuws, Anderlecht are “doing everything” they can to secure Mbemba’s signature. They have offered him a four-year deal to return to Astrid Park. 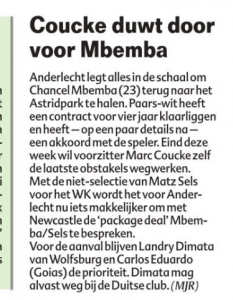 HLN claims they have an agreement with the player, except “for a few details”. Anderlecht chairman Marc Coucke will now eliminate the last obstacle himself to get the deal over the line at the end of the week.

The Belgian side also has goalkeeper Matz Sels on loan from Newcastle. Anderlecht will discuss a package deal with the Tyneside club that will help them sign both Mbemba and Sels.

“I wanted to be sure to play” – Prolific forward explains...