It’s a day of the week ending in ‘y’, so you know that somewhere in Italy, a transfer story about Matteo Darmian returning to his home country has been published.

The first we found (or ‘the first we were unable to ignore’) on Wednesday was Gazzetta dello Sport’s report on Inter’s revived interest in the Manchester United defender.

Plastering a picture of him between Cristian Biraghi and Chelsea’s Emerson Palmieri, the Italian newspaper explain Darmian has surged back into the lead, especially since he’s currently free to talk to clubs outside of England regarding a free transfer in the summer.

Manchester United could, of course, trigger his one year extension at any moment, but they haven’t for now, so that makes him an inviting target for clubs like Inter, always looking out for a bargain deal because of FFP. 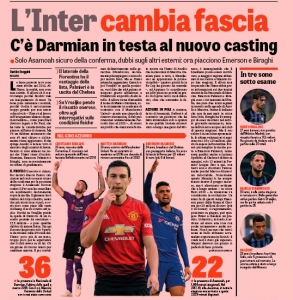 Gazzetta explain that ‘everyone likes’ the idea of bringing Darmian to the San Siro, and he’s considered as a ‘precious wild card’, seeing as he can cover all positions in the defence.

Most people who held their breath last time (despite us warning them not to) have since passed out.

It’ll happen when it happens, and by that we mean it probably won’t, but there’s always hope, isn’t there?